In our last post about how we select exhibitors for the Yarningham marketplace I’ll talk a bit about the panel. The panel is made up of TEAM YARNINGHAM – myself (Sara Fowles), Helen Winnicott, Venetia Headlam and Lilith Winnicott.

Sara Fowles “I grew up in Birmingham and learnt to knit at school aged around 7. I then promptly gave up knitting and learnt to sew instead, crafting clothes for myself out of pillowcases and my mothers cast offs. I didn’t take up my needles again until a friend gave me a birthday gift of 2 balls of chunky Rowan yarn. Less than a year later I had started Stitches and Hos, a monthly knit night held in a pub. Over the last couple of years I have expanded my making repertoire to include machine knitting after buying a machine in a charity shop.”

Venetia Headlam “My mom taught me to knit when I was about 7 or 8 years old, I forgot it all then she re-taught me when I was 11, ill and needed something to do. She also taught me the basics of crochet when I was 14, and I have surpassed her in my skills, she will now call on me if she needs “help” with something (ie wants me to do it for her!). Over the past few years I have expanded my skills and added knitting machines and an electric spinning wheel to my arsenal of yarn crafting instruments. The spinning wheel doesn’t get as much action as the needles/hooks/machines but I am determined to make yarn that actually looks decent, and not like spun carpet fluff.”

Lilith Winnicott “I began knitting as a child and promptly forgot how to do it. I re-learnt when I was about 18 and chose the most complicated pattern to knit, on dpns! I also sew, bake and build things. My life seems to revolve around one craft or another but I love it all”

Helen Winnicott “My mom taught me to knit when I was 6 or 7, but I don’t remember making anything until I was a bit older. My cousin and his wife had a baby girl when I was 12 and I knitted bootees and a cardigan for her. I began knitting again in 1989 when I was pregnant with my first child and have never stopped since then. I knitted things for all my children when they were small and now for my grandchildren. Thanks to the internet, I found lots of indie dyers and gorgeous yarns and love to knit socks and shawls for myself. I have tried to crochet but am not very good at it and can only manage a chain.”

In this blog post about how we select exhibitors for Yarningham, we’ll look at what we are looking for.

The Yarningham marketplace is the place to find the best independent dyers, producers, designers, online retailers, brick and mortar shops from around the UK and beyond.

The scoring system we use is divided into categories with points given for each category. Points are awarded for uniqueness of style/voice, diversity of range and price points and quality of the products. We award points based solely on the application form for that year.

A point is given for applicants new to Yarningham which helps us to ensure that 50% of our marketplace is new to Yarningham each year. A point is also given to those who have followed the application guidelines and sometimes this can be the difference between being selected and not.

In the next blog post about how we select I’ll tell you a bit more about the Yarningham panel a.k.a. TEAM YARNINGHAM

A large part of Yarningham is our marketplace. It’s THE place to find the best independent producers, dyers, designers, online retailers and bricks and mortar shops.

From the beginning we set a rule that at least 50% of the marketplace each year must be new to Yarningham. This helps to ensure that the marketplace never feels like its gone stale or we’ve just repeated last year’s festival. It can lead to some very difficult decisions when going through applications but this rule is crucial for Yarningham.

This exercise of looking back through our feedback and compiling statistics has been really eye opening. We’ve never properly analysed our feedback and usually take a much more practical approach to using it. What needs to change? What can we improve? But there’s nothing like a cold hard figure staring back at you unexpectedly from the calculator to surprise you with what you’ve achieved.

And so it was with this figure. Out of 107 exhibitors over the four editions of Yarningham, 71 are unique. Meaning that over the 4 years of the festival 65% of our marketplace has been new to Yarningham. I always knew that we had achieved our target each year but never imagined that we had such a high number of unique exhibitors.

This success is really about TEAM YARNINGHAM. Without Lil, V and Helen as part of the team I think this figure would have been difficult to achieve.

There’ll be one more feedback post after this one. If you’ve missed the other three you can find them here (Part 1), here (Part 2) and here (Part 3).

TEAM YARNINGHAM would like to say a very big thank you to everyone who has donated to our Ko-fi page.

We hit our target of raising £200 to pay for a bigger marquee at next year’s festival within 24 hours. We are really blown away by the support.

So once again a big

We want everyone to feel welcome, respected and safe at Yarningham.

We will not tolerate discrimination of anyone because of gender, social background, race, sexuality, age, disability or religion.

Anyone that is found not adhering to our policy will be asked to leave.

If you have any concerns during Yarningham 2019 please feel free to approach one of the team.

Two members of our team here at Stitches & Hos HQ are taking part in The Moonwalk London 2018 on the 12th May. Helen and her daughter Lilith, have signed up to Walk the Walk and raise money for Breast Cancer charities and research. In April last year, Helen was diagnosed with Breast Cancer. Luckily, it was caught at an early stage and was successfully treated with surgery. Helen, Lilith, and the rest of their family want to give something back to the charities and research companies that work so hard to help so many.

On Saturday 28th April, we at Team Yarningham completed our final training walk in preparation for the Moonwalk 2018. In total we walked just under 21 miles!

The Moonwalk is an event raising money for Breast Cancer charities and research, organised by Walk the Walk. It is a marathon length walk in London beginning at midnight. Oh, and you do it in a decorated bra! 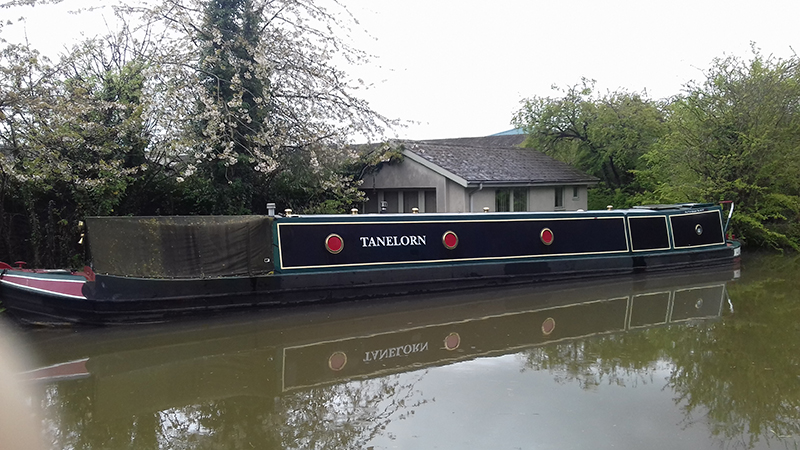 We began our final walk in Stratford-Upon-Avon and we decided to walk along the canal. It rained and we were both quite muddy by the time we’d finished, but we kept going and cheered each other up.

We spotted so many sheep! They kept walking up to the edge of their fields and watching us – they were so noisy! We also saw some ducks; including little fluffy ducklings, some geese and a swan. 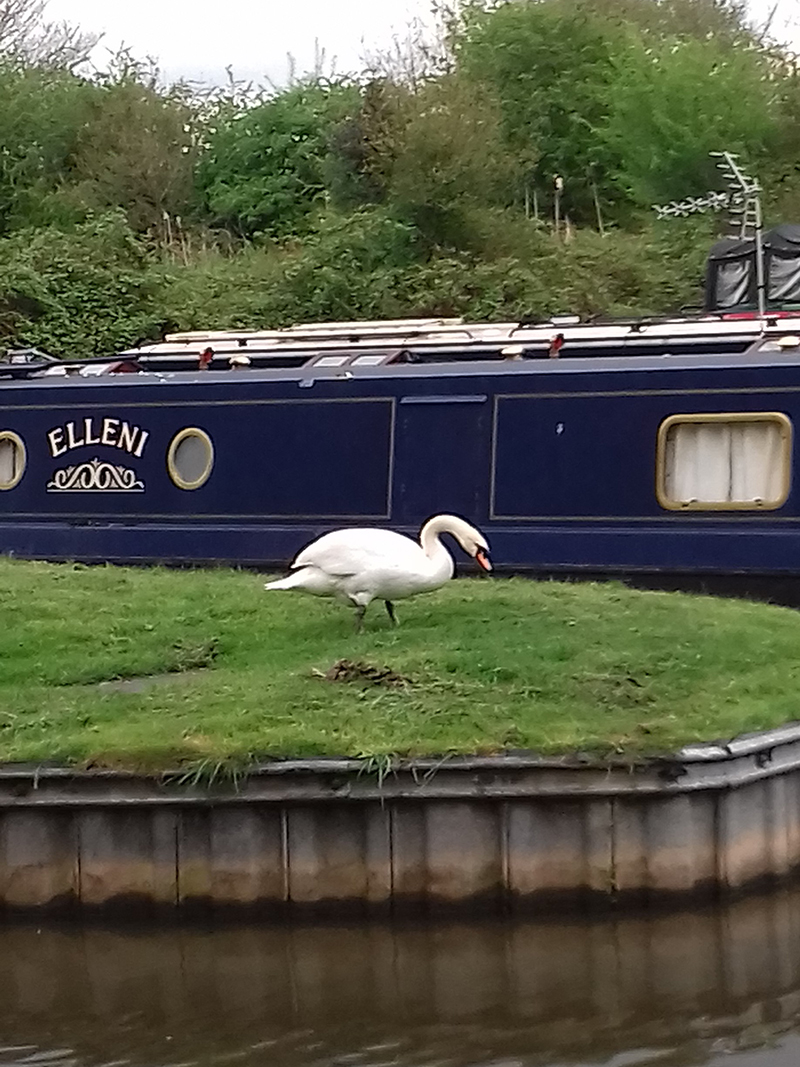 The Moonwalk is on May 12th, so if anyone wants to donate to a worthy cause, there’s still time. Follow the link Sponsor Team Yarningham

Last weekend Helen and I took a train to visit Edinburgh Yarn Festival.  The festival, now in it’s 5th year was bigger than ever.  This was our second visit to the festival and we had a great time.  Here are a few pictures from our trip. 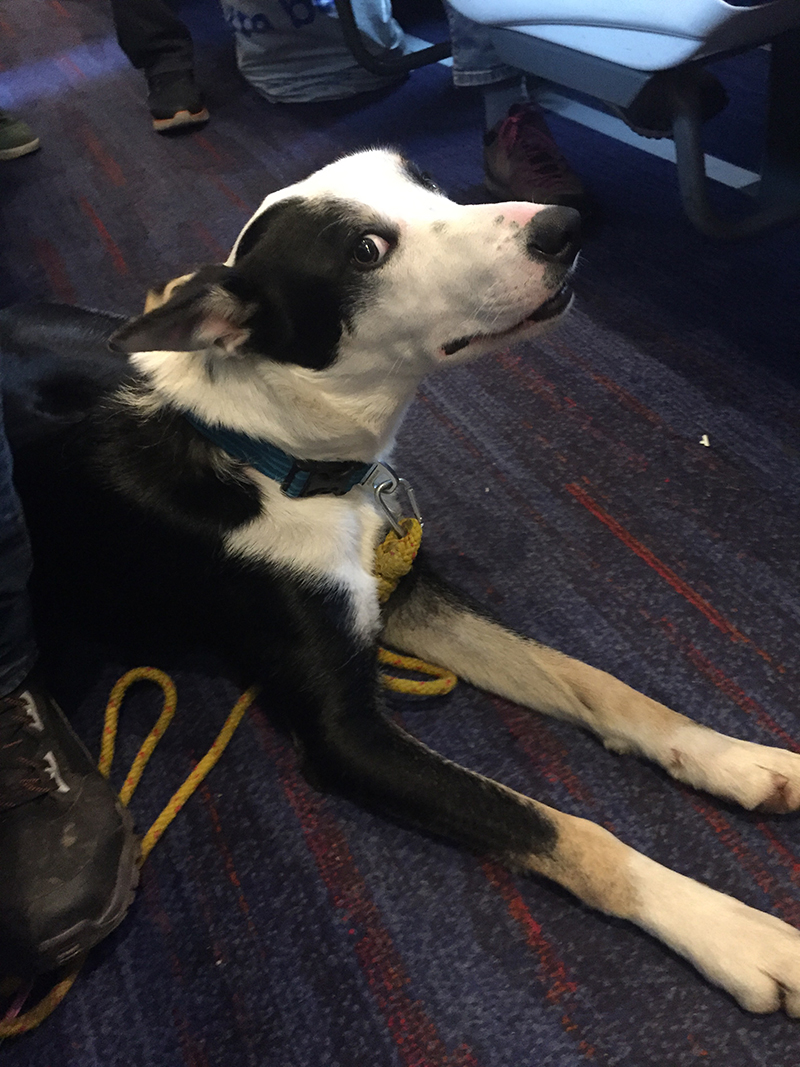 We met Zebedee, who was on his very first train ride.

Getting our stitch on, on the train. 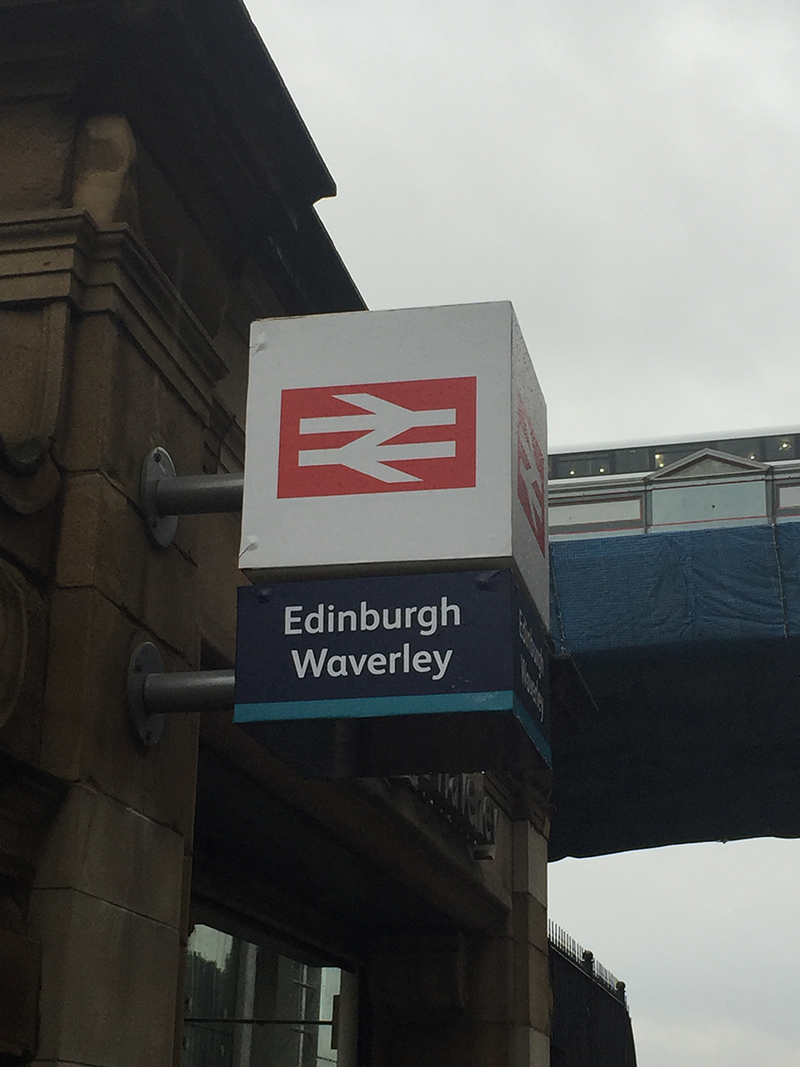 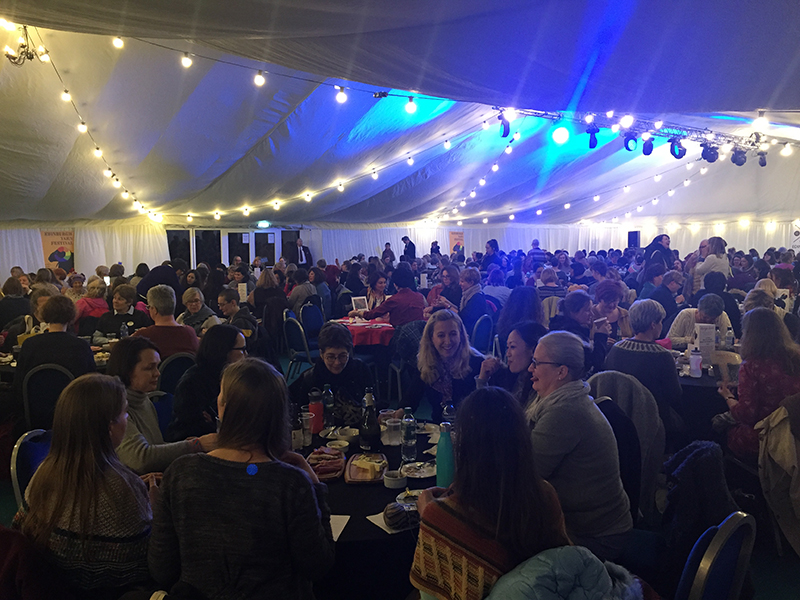 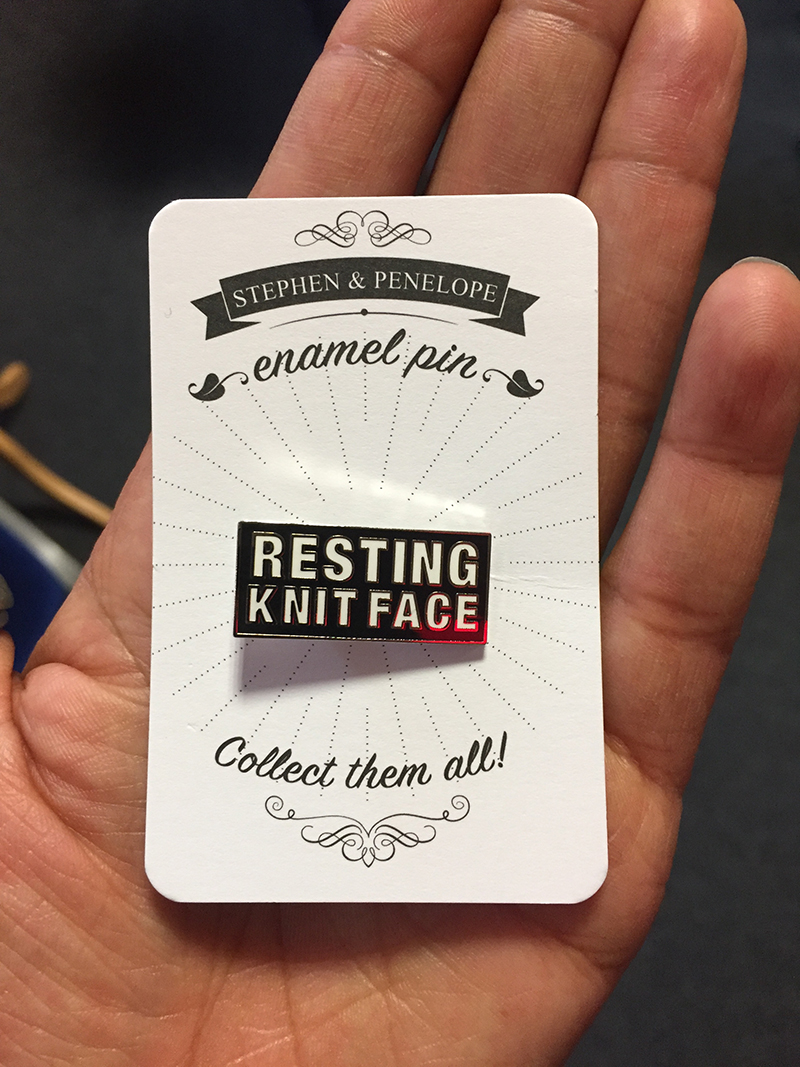 The ladies at La Fee Fil stand had marvellous headgear

Just that thing where we met Stephen West 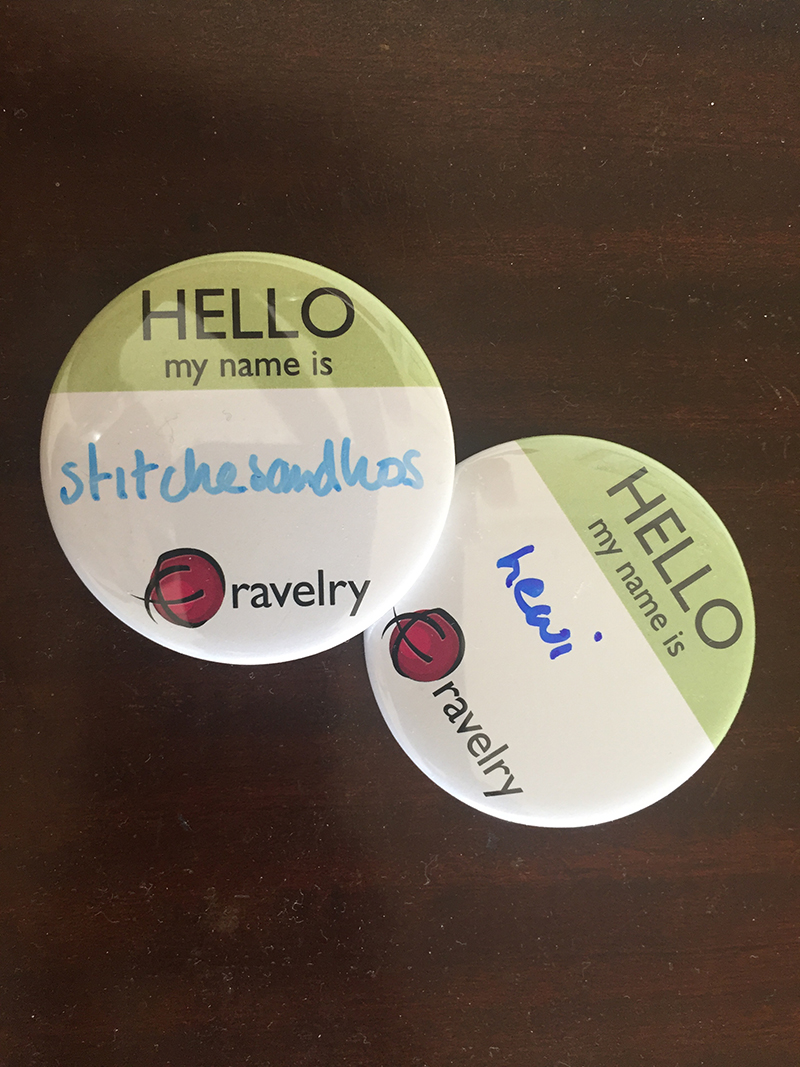 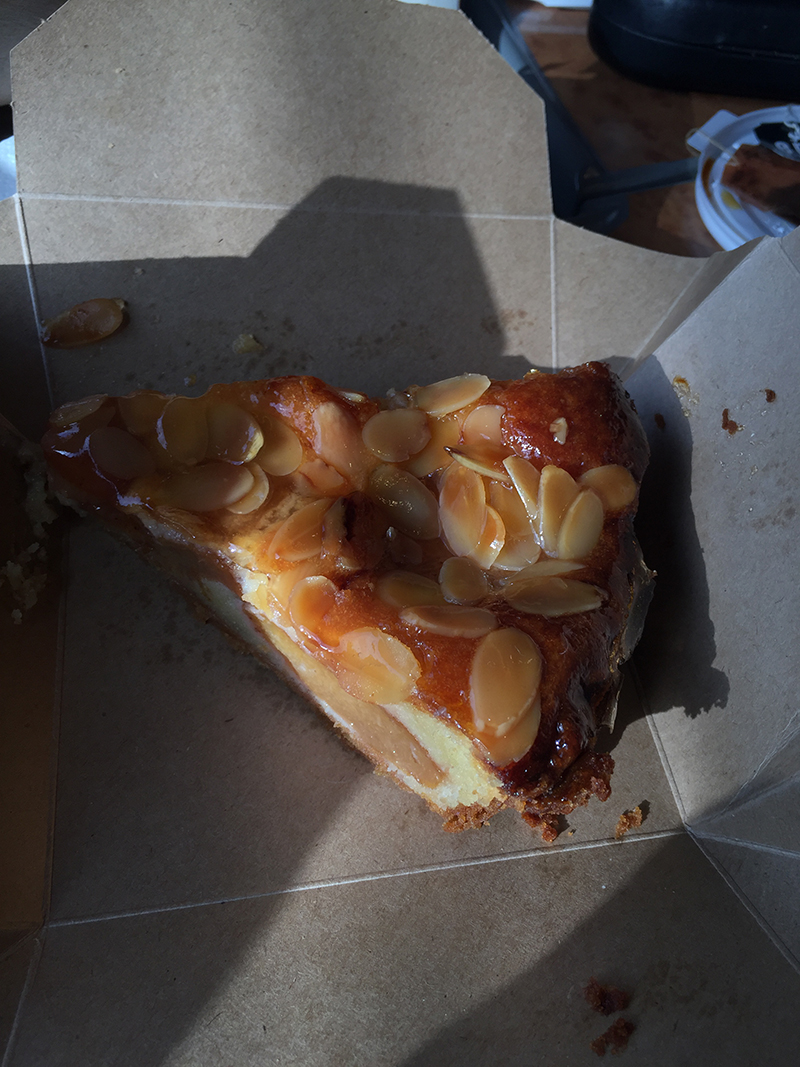 Takeaway cake for the journey home from Urban Angel bistro

Team Yarningham have been busy with their needles knitting donations for our charity Knit Aid.

Knit Aid is a social enterprise helping knitters to help others in need.  Knit Aid was set up as a response to the refugee crisis in Europe, in particular the many refugees that had travelled to France and have been living in cold and harsh conditions.

Knit Aid started their knitted donations with Calais but are proud to have extended our distribution to Dunkirk, various locations in Greece, Turkey, Lebanon, Jordan and Syria

So, we are asking you our lovely stitchers to pick up those needles and hooks, raid your stash and make something for someone in need.

Knit Aid work with volunteers who work in the refugee camps to make sure that they are only sending donations which are needed and useful. Because of this, Knit Aid are currently only accepting the following items:

Please do not make anything other than that listed above.

Team Yarningham (Helen and I) spent a couple of days last week in Edinburgh to visit Edinburgh Yarn Festival. The trip was a chance for us to meet up with exhibitors, experience another urban yarn festival and get to see and squish lots and lots of lovely yarn.

Here are a few photos from our trip 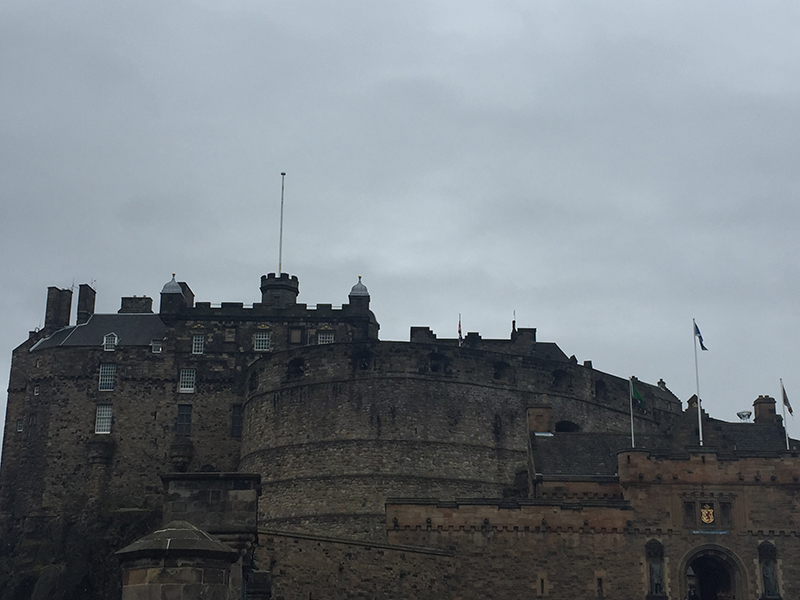 Inchkeith Lighthouse lens in National Museum of Scotland.  The lens was made in Birmingham by Chance Brothers.

My very reserved purchases from EYF.  A project pouch by Danica from Kettle Yarn and some bulb safety pins by Merchant and Mills from Grace at Beyond Measure.

In all we had a great time in Edinburgh.  EYF is a great festival.  I don’t think I’ve ever seen so many stitchers in one place!